Home » News » Behind The Scenes » Who wants a story about the uninteresting side character?

I confess: I've skipped books about the side character I didn't care for. Until I finished the rest of the series and felt compelled to go back. And, dang it, sometimes it turns out to be my favorite.

Don’t you hate it when the next book in the series is about the guy you only feel blasé about? He’s been a reasonable side character, but he can be a jerk sometimes, and he’s not that interesting at the best of times.

Ha. I hate that, too. But I love a good redemption story. And love at first sight isn’t always a thing, even for the readers of Romancelandia.

A few Thorny romances take that jag, but I’m thinking about one in particular.

Bennett was that guy. A bit rigid and lacks an imagination. Unforgiving until proven otherwise. Handsome-ish, depending on your taste, but resistible.

Walk a mile in someone else’s shoes.

To understand Bennett, we need to see who he was in the beginning. An eager young hunter, ready to take on the world. He knew better than to trust a vampire, as they are inherently alluring, but one catches his eye – and his libido – and the sweet defender happily gives his virginity to a centuries-old vampire with commitment-phobia. Heartbreak. But her persevered.

At the beginning of Six, again, heartbreak. As always, he powered on. Flash forward, after Six and after Wildest, and he keeps his head held high, but he is alone. Like, darkly alone. Silently struggling. Not the hero he always dreamed he’d be. No soulmate to snuggle. A single guy in an oversized warehouse with no plans. Even his team can’t pull him out of his rut.

So he does what he knows. He trains. He fights. His mother, a hunter herself, always feared he lacked the survival instincts necessary to thrive as a hunter. And maybe he does.

Otherwise he wouldn’t have ended up the focus of a prophecy more violent and hopeless than the one he’d wanted. One foolish night, and he became his own enemy.

“But you are also a puny human. Weak. Alone. Doomed.”
“Hasn’t stopped me so far.” - Bennett, Changed, Demon Hunters #3 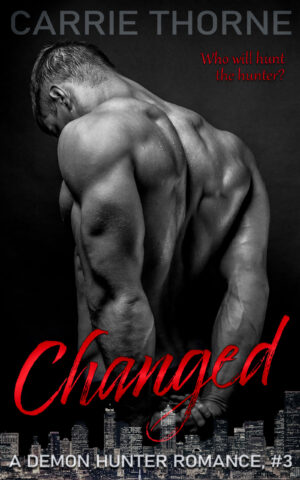 Want to Learn More? Me too!

A brief meditative entrance to Foothills.